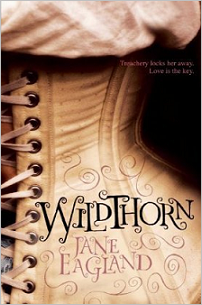 Seventeen-year-old Louisa Cosgrove longs to break free from her respectable life as a Victorian doctor’s daughter. But her dreams become a nightmare when Louisa is sent to Wildthorn Hall: labeled a lunatic, deprived of her liberty and even her real name. As she unravels the betrayals that led to her incarceration, she realizes there are many kinds of prison. She must be honest with herself – and others – in order to be set free. And love may be the key… – Summary from Goodreads.com
To start with, it took me a while to get into this book and because of this I was a little hesitant to continue reading. However, I am very glad I did continue, as this book was a truly great read in the end.
The story is set in the 19th century and starts when our protagonist, Louisa, is sent to an insane asylum. Louisa has no idea why she has been sent there, or who has sent her, and she spends a good length of the book trying to figure these things out. She knows that she is not insane, however it’s up to the reader if they believe her or not.
The narrative takes us from the present day, back to the past to Louisa’s childhood, and there we learn about how she has always wanted to follow in her father’s footsteps and become a doctor. A female doctor was not seen as acceptable in Louisa’s time and as we read various ‘flashbacks’ we see how Louisa struggles with being different to most girls, and not living up to her mother’s expectations of her.
I thought that the plot was well thought out, and there were even a couple of twists, which I am not used to in a historical novel. I was very interested in the asylum and the culture of 19th century England, and Eagland managed to keep me intrigued throughout the novel. She painted a perfect picture of the era and some of the descriptions were so vivid I had to stop reading for a moment to take it all in.
The character of Louisa was very likable, and I felt able to connect with her easily. I felt so sorry for her being locked up in the asylum for no apparent reason, but she was strong and that is what gave me hope.
Overall, I highly recommend this book. As Jane Eagland’s first book, I think she did a phenomenal job with it, and I will certainly be reading more of her works in the future.
Rating: 4/5

You can buy ‘Wildthorn’ from Amazon US

, Amazon UK or The Book Depository in both hardback and paperback. Go and check it out!