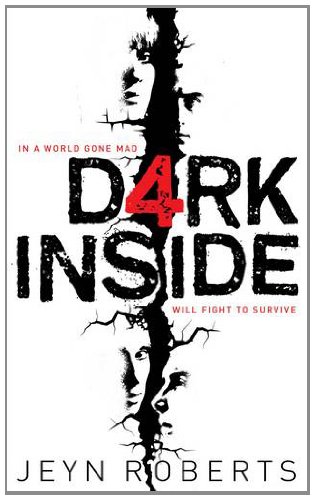 Buy the Book: Amazon US

Four teenagers on the same road in a world gone mad. Struggling to survive, clinging on to love and meaning wherever it can be found. THE DARK INSIDE is a stunning, cinematic thriller: 28 DAYS LATER meets THE ROAD.
Since mankind began, civilizations have always fallen: the Romans, the Greeks, the Aztecs…. Now it’s our turn.
Huge earthquakes rock the world. Cities are destroyed. But something even worse is happening. An ancient evil has been unleashed, hooking on to weakness, turning the unwary into hunters, killers, crazies. – Goodreads Page

Dark Inside is an apocalyptic novel that begins just as several earthquakes take place all over the world. One particularly strong earthquake destroys the west coast of America, causing mass destruction from Mexico up to Alaska. Hawaii has been wiped out by tidal waves, and London is full of riots. The book follows four survivors who try to keep themselves – and others – alive as the rest of the population go crazy and start to turn on each other.

I really enjoyed the fast paced, action packed storyline. Jeyn Roberts did an excellent job with creating a compelling plot that kept me sucked in. The story is told from four different peoples’ points of view; switching POVs each chapter. There is also a few chapters here and there which are told from the point of view of ‘Nothing’. What is this Nothing? That’s just one of the mysteries of the book.
The crazy people were a lot like the people in “The Crazies” movie. I loved their descriptions and actions, and Roberts did an incredible job of making them creepy. It was incredibly refreshing to read a good horror novel that actually had me biting my nails. There is one particular scene in the snow which made me shiver. So. Creepy.
I enjoyed reading about how the survivors were coping with their new lives on the run from these crazies – who some of them called Baggers. It was great to read about their different journeys to their destinations, and how each character subtly related to the others.
The crazies weren’t all as they seemed, either. There were a few discoveries to be made throughout the book, which I was very intrigued to read about. Why were people turning crazy? Why were some staying ‘normal’?
Dark Inside was an enjoyable read that kept me on my toes. That said, I disliked the abrupt ending and would have rather have had a few more pages to lengthen it out a bit. I also don’t like what happened to Daniel. I won’t spoil it! Also, the amount of characters in the book confused me a little. As there were four different points of view, there were also four characters that met up with more characters. There was, in the end, a pretty big cast, and I became confused with the names and backstories of them once they’d been off the page for a couple of chapters.
Definitely check this out, because Dark Inside is one of the best horror novels – aside from the wonderful books by Darren Shan, of course *wink* – that I have ever read. Unfortunately, there were a few points that were a bit of a letdown, and this meant the book was given a lower rating than I would have preferred.