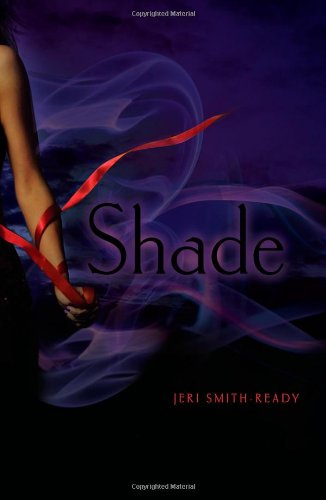 Shade by Jeri Smith-Ready
Release Date: May 4th, 2010 (US)
Publisher: Simon Pulse
Rating: 4 out of 5
Recommended? Yes.
Buy the Book: Amazon US

Best. Birthday. Ever. At least, it was supposed to be. With Logan’s band playing a critical gig and Aura’s plans for an intimate after-party, Aura knows it will be the most memorable night of her boyfriend’s life. She never thought it would be his last.

Logan’s sudden death leaves Aura devastated. He’s gone.
Well, sort of.
Like everyone born after the Shift, Aura can see and hear ghosts. This mysterious ability has always been annoying, and Aura had wanted nothing more than to figure out why the Shift happened so she can undo it. But not with Logan’s violet-hued spirit still hanging around. Because dead Logan is almost as real as ever. Almost.
It doesn’t help that Aura’s new friend Zachary is so understanding—and so very alive. His support means more to Aura than she cares to admit.
As Aura’s relationships with the dead and the living grow ever complicated, so do her feelings for Logan and Zachary. Each holds a piece of Aura’s heart…and clues to the secret of the Shift. – Goodreads page

I mentioned in my review of Past Midnight that I’ve not read many books about ghosts, and so when I heard about Shade I had to pick it up!

In Aura’s world, there was an event called the Shift. Everyone who was born after this was able to see and communicate with ghosts. Aura is one of these people, and she spends much of the novel talking to various ghosts, the most important one being that of her boyfriend, Logan, who tragically died.
The world in which this is set is not too far from ours, and yet this book somehow had a very prominent dystopian feel to it. Did anyone else think that, or was it just me? I loved reading about how the society had changed to accommodate for the new inhabitants, and I loved reading all the different ‘rules’ that came with communicating with the dead.
I especially loved the fact that not everything was as it seemed – which you will find out once you’ve read this book – and that the people who worked for the government were rather scary! It’s always good to have scary villains, isn’t it?
Aura wasn’t the most intriguing character due to her bland personality, however with her background; she was very fun to read about. There is so much mystery there, and a lot for Jeri Smith-Ready to expand upon in the upcoming sequel(s).
Logan, Aura’s newly dead boyfriend, was a bit of an ass. I didn’t like him at all, and honestly didn’t understand the attraction that Aura maintained for him throughout most of the book. I guess she had known him for a lot longer than I had, but still. He wasn’t very nice, let’s put it that way.
Zachary, the new, hot Scottish guy at school, was interesting. As with Aura, there was so much mystery surrounding dear old Zach, I kept waiting for him to be in the scenes so that I could find out who the hell he was! I loved him.
Overall, I absolutely loved Shift. I think Jeri Smith-Ready did a fantastic job with it, however I do have one criticism – the Briticisms used in this novel. As a native English lady (haha, lady!), I did find a couple of misuses of certain phrases. Nothing too important, but the word “bloody” was often out of place in a sentence. I would have to swap the words in the sentence around for it to ‘make sense’. Alas, that is just me being VERY picky! And maybe the people where I come from use bloody in a completely different manner to those in Scotland.
Oh and also, although I am from England, I have never ever seen anyone eat a pizza using a knife and fork unless they were in a posh restaurant. We Brits aren’t as posh as you guys across the pond seem to think!
And with that I leave you to go and buy the book, because it is a truly fantastic read!