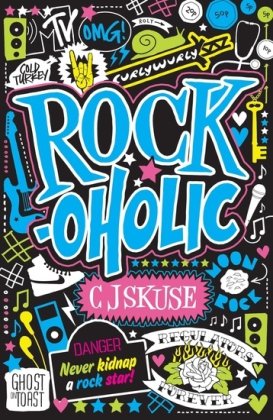 Jody loves Jackson Gatlin. At his only UK rock concert, she’s right at the front. But when she’s caught in the crush and carried back stage she has more than concussion to contend with. Throw in a menacing manager, a super-wired super-star, and a curly-wurly, and she finds herself taking home more than just a poster. It’s the accidental kidnapping of the decade. But what happens if you’ve a rock-god in your garage who doesn’t want to leave? Jody’s stuck between a rock-idol and a hard place!


From the pen of C.J. Skuse, author of last year’s super cool debut Pretty Bad Things, comes a tale of rock star obsession gone nuts. Hilariously and sharply explores the fantasy and reality of celebrity obsession through a teenager’s eyes. C. J. Skuse has been billed as the new Nick Hornby for teens. – Goodreads

Jody, Rockoholic’s main character, is Jackson’s biggest fan. When her best friend Mac gives Jody a ticket to The Regulator’s gig she jumps at the chance to go. After queuing up outside all day Jody gets to see just three songs before she hits her head and is taken to the nurse’s room.

Mac drives her home, plus one – Jackson , who is so high on drugs at the time he thinks that Jody’s Curly Wurly is a knife. Yes, you read that right!
Honestly, I found the concept of this novel to be very bizarre. I mean, a fan kidnapping her idol and stashing him away in her sound proof garage is a little strange, right? But I loved it.
Rockoholic is filled with humour and various references which had me laughing out loud. Skuse has an original and unique writing style which drew me in straight away. She also deserves bonus points for the Harry Potter references!
Mac was a fantastic character. I loved it when Mac was looking after his younger sister. I also loved the fact that he stars as Frankenfurter from The Rocky Horror Picture Show in a play.
Now, the parts of the book that I didn’t like were Jody and Jackson. Both characters were immature and got on my nerves – Jackson more so than Jody.
Jody kidnaps a rockstar and thought it was completely okay to keep him for a few days, and Jackson was a 27 year old drug addict living in a 16 year old’s garage.
I don’t know if Jody’s behaviour was realistic – as realistic as it could be, anyway – or not, but I would have never acted like she does at sixteen. Then again, my stepmum does say I’m abnormal, haha. I admit that Jody did grow on me after a while, and there was a hell of a lot of character growth there.
That said, the book does send out a good message towards the end and I feel that this is important amongst the teen hysteria.
Overall, I liked the book. I loved Mac and Cree and Skuse’s writing, but I just couldn’t connect with Jody. Although, there are probably lots of teenage girls out there who can.