There’s been a lot of talk about some of my favourite young adult books being turned into movies as of late, and I am always holding my breath to see who they cast next. Unlike what seems like the majority of the fandom, I am actually pretty happy with the castings for both The Hunger Games and The Mortal Instruments. I, for one, am not bothered about what the actors look like. They don’t need to be carbon copies of the character they are playing. The only thing they need to be able to do is act. And act fantastically. The movie studio could have cast Katniss’s identical twin, but that would have been useless if the actress portraying her couldn’t pull off the part.

Enough of my blabbering. I’ve decided to start this new ‘feature’ on the blog. I’m not sure how long it’s going to last, but I love sharing and discussing my dream casts with people and so, as this is a book blog, I thought why the hell not? I’ll be sharing with everyone my dream team of actors and actresses for some of my favourite novels and series. I’ll be choosing my cast based on both looks and acting talents. Or one or the other. I don’t know. It’s MY dream team, so I’ll just roll with it.
This time, as the title shows, I’ll be showing you all my dream team for The Mortal Instruments. Not that I’m not happy with Jamie or Lily, because I totally am. Okay, let’s get started.

Clary Fray/Emma Stone
Age: 16
Hair Colour: Red
Eye Colour: Green
Why Emma? I think that Emma is a fantastic actress. She can pull of comedy, which I think is needed in the TMI series, and she can also do serious. And look at her! With a bit of movie magic, I think she could pull of a sixteen year old. To be honest, I don’t even care if she couldn’t. I’d happily settle for Clary looking a bit older. In short: I am in love with Emma Stone. 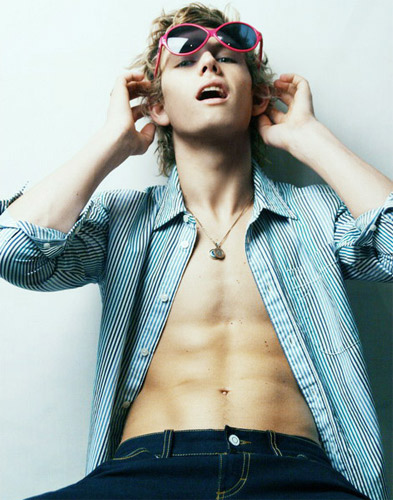 Jace Wayland/Alex Pettyfer
Age: 17
Hair Colour: Blonde
Eye Colour: Golden
Why Alex? Why not? I’m not a huge fan of AP, if I’m totally honest, but look at that picture and tell me that’s not Jace Wayland right there. Simon Lewis/Kristopher Turner
Hair Colour: Black
Eye Colour: Brown
Why him? I just think he looks like Simon, don’t you? The glasses are absolutely adorable, and I can imagine him being turned into a rat and back again. I can also imagine him being dorky with Emma Stone. (Thanks for letting me know who this guy is, Elzahh!)

Valentine/Jason Isaacs
Hair Colour: White Blonde
Why Jason? Do I really need to spell it out? Jason is a fantastic actor. He does evil really well (just look at Captain Hook and Lucius Malfoy!) and  I think he’d be perfect for the role of Valentine. I can definitely see him being creepy, and just a genuine bastard. I’ve actually met him in real life, and he’s such a lovely person, you wouldn’t have thought he could play such bad characters!

Isabelle Lightwood/Alexandra Daddario
Hair Colour: Black
Eye Colour: Dark Brown
Why Alexandra? Okay, so I had a really tough time trying to find someone who I would choose to play Izzy. The first person that came to mind was a younger Lucy Lawless, but obvious that’s now out of the question. I picked Alexandra because I think she’s pretty and girly enough to play Izzy, and yet I think she’d also be great at playing a kickass character. Can you imagine her with whips?

Alec Lightwood/Gaspard Ulliel
Hair Colour: Black
Eye Colour: Striking Blue
Why Gaspard? Look at him! He’s so adorable. I can totally imagine him as Alec. I don’t think I’ve seen him play in any lead roles, but I think he could easily pull of a supporting character such as Alec. I can’t stop staring, seriously.

Luke Garroway/Gale Harold
Hair Colour: Brown
Eye Colour: Blue
Why Gale? I think Gale would make a fantastic fatherly figure for Emma/Clary. I can just imagine him sitting in his house, reading a dusty old book. I can also imagine him turning into a wolf 😉
Aaaaand, that’s it. I know I left out Magnus, but I honestly can’t think of anyone who could play the glittery warlock. I’d have to do a lot more research into eccentric characters to try to find the perfect match!
Anyway guys, did you enjoy this post? Would you like to see more? Who would be your dream team for The Mortal Instruments?