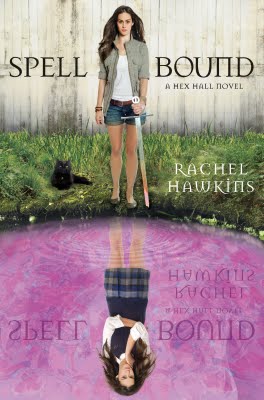 Spell Bound by Rachel Vincent
Hex Hall #3
Release Date: March 13, 2012
Just as Sophie Mercer has come to accept her extraordinary magical powers as a demon, the Prodigium Council strips them away. Now Sophie is defenseless, alone, and at the mercy of her sworn enemies—the Brannicks, a family of warrior women who hunt down the Prodigium. Or at least that’s what Sophie thinks, until she makes a surprising discovery. The Brannicks know an epic war is coming, and they believe Sophie is the only one powerful enough to stop the world from ending. But without her magic, Sophie isn’t as confident.

Sophie’s bound for one hell of a ride—can she get her powers back before it’s too late?

Goodreads | Rachel Hawkins’ Twitter
I absolutely loved the first two books in this series – Demonglass was slightly better than Hex Hall, though, I must admit – and I am DYING to read this one! I’ve been waiting all year for it to come out and now there’s only a few months to go!
Have any of you guys read this series? If not then you definitely should. Archer is HOT and awesome, and Sophie is pretty badass.
Thank you to Sam for helping me figure out which book to talk about!