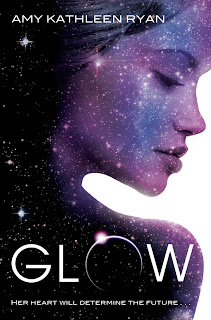 Glow by Amy Kathleen Ryan
What if you were bound for a new world, about to pledge your life to someone you’d been promised to since birth, and one unexpected violent attack made survival—not love—the issue?
Out in the murky nebula lurks an unseen enemy: the New Horizon. On its way to populate a distant planet in the wake of Earth’s collapse, the ship’s crew has been unable to conceive a generation to continue its mission. They need young girls desperately, or their zealous leader’s efforts will fail. Onboard their sister ship, the Empyrean, the unsuspecting families don’t know an attack is being mounted that could claim the most important among them…
Fifteen-year-old Waverly is part of the first generation to be successfully conceived in deep space; she was born on the Empyrean, and the large farming vessel is all she knows. Her concerns are those of any teenager—until Kieran Alden proposes to her. The handsome captain-to-be has everything Waverly could ever want in a husband, and with the pressure to start having children, everyone is sure he’s the best choice. Except for Waverly, who wants more from life than marriage—and is secretly intrigued by the shy, darkly brilliant Seth.
But when the Empyrean faces sudden attack by their assumed allies, they quickly find out that the enemies aren’t all from the outside.
Glow is the most riveting series debut since The Hunger Games, and promises to thrill and challenge readers of all ages.
GoodReads | Shelfari
Pre-order: Amazon US

This book sounds AMAZING! You all know how much I love a good dystopian, and judging by the synopsis and early reviews I have read, this dystopian novel is one of the best out this year. It’s out in September in the US, and October in the UK, but lucky for me Macmillan were kind enough to send me a copy. I cannot wait to read this book, and to be honest I’ll probably be reading this very, very soon! Have any of you read this? What did you think?
Oh, and did I mention just how stunning I find the UK cover? It reminds me a lot of Across the Universe, because of the stars. Squee!