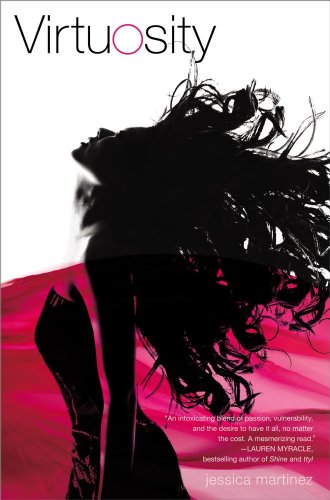 Now is not the time for Carmen to fall in love. And Jeremy is hands-down the wrong guy for her to fall for. He is infuriating, arrogant, and the only person who can stand in the way of Carmen getting the one thing she wants most: to win the prestigious Guarneri competition. Carmen’s whole life is violin, and until she met Jeremy, her whole focus was winning. But what if Jeremy isn’t just hot…what if Jeremy is better?

Carmen knows that kissing Jeremy can’t end well, but she just can’t stay away. Nobody else understands her–and riles her up–like he does. Still, she can’t trust him with her biggest secret: She is so desperate to win she takes anti-anxiety drugs to perform, and what started as an easy fix has become a hungry addiction. Carmen is sick of not feeling anything on stage and even more sick of always doing what she’s told, doing what’s expected.

Sometimes, being on top just means you have a long way to fall…. – Goodreads Page</div>

Virtuosity is told from the point of view of Carmen, an award winning violinist who is about to enter a competition and is going up against Europe’s best male violinist. I’m not a huge fan of music to be honest. I mean, I love listening to it, but I don’t understand most of the terms that musicians use and I can’t play an instrument to save my life. Actually, that’s a lie. I used to play the recorder. Boo-yeah. Anyway, what I was leading to before I got sidetracked was that the music in this book, while being a huge part of the novel, wasn’t overpowering and there weren’t music terms thrown around left, right and centre.

I really enjoyed reading from the point of view of Carmen, as she was easily relatable and I loved her personality. I was led to feel so sorry for her, and I was cheering her on during the latter half of the book. For coming from such a rich family, she’s definitely not spoilt and she’s really down to earth once you get to know her. I would have liked to have seen some development in the relationship between her and her biological father, perhaps just some sort of communication, because I felt like this could have been a goof focus for the novel. However, Carmen has a great relationship with her stepdad, which was awesome to read about.
Carmen’s relationship with Jeremy did move very fast. I would have preferred a little more build up, but without much action happening – this is contemporary, after all! – I think Jessica Martinez handled this quite well. Jeremy was a really sweet guy, and a well developed character. We learnt a lot about his own family, which I enjoyed. Tip: If a guy from Britain was to state his nationality, he would not say he’s British. He would say he’s English, Welsh etc.
I absolutely hated Carmen’s mother, Diana. I think that if I had seen more of her then I would have despised her as much as Nash from the Soul Screamers series. I almost do. She was an awful mother to Carmen, for various reasons. The main reason being she put her daughter on anti-anxiety drugs, and she practically forced her to take them. This made me so unbelievably angry. Diana was a very controlling mother, and ran Carmen’s life for her. I was very pleased with how their relationship turned out in the end.

Overall I enjoyed Virtuosity to an extent that was completely unexpected! Jessica Martinez is a fabulous author, and she told Carmen’s story really well. I’d definitely recommend this to fans of contemporary fiction, whether you like music or not. It’s a great book!