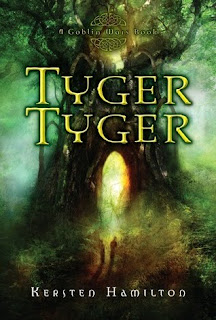 
(The Goblin Wars P.1) Teagan Wylltson’s best friend, Abby, dreams that horrifying creatures–goblins, shape-shifters, and beings of unearthly beauty but terrible cruelty–are hunting Teagan. Abby is always coming up with crazy stuff, though, so Teagan isn’t worried. Her life isn’t in danger. In fact, it’s perfect. She’s on track for a college scholarship. She has a great job. She’s focused on school, work, and her future. No boys, no heartaches, no problems.

Until Finn Mac Cumhaill arrives. Finn’s a bit on the unearthly beautiful side himself. He has a killer accent and a knee-weakening smile. And either he’s crazy or he’s been haunting Abby’s dreams, because he’s talking about goblins, too . . . and about being The Mac Cumhaill, born to fight all goblin-kind. Finn knows a thing or two about fighting. Which is a very good thing, because this time, Abby’s right.
The goblins are coming. – Summary from Goodreads.com


The story started off strongly, the action kicked off right from the beginning and I thought this was brilliant. Although, a certain point was very much glossed over very near to the beginning, and from then on I felt that the book lost it’s initial charm. I felt that more time should have been spent on it, because it really was a life changing event for Teagan and her family.

The main plot was a nice idea, nothing original though. Girl travels to an unknown place to save her dad who has been kidnapped. I’ve seen it before. However, I do give Kersten Hamilton major, major points for the fantasy side to her story. The fantasy world of Mag Mell was a wonderful idea, and the various amounts of goblins, Sidhe and other magical creatures were incredibly described and written about.

I found most of the characters to be very dull. Teagan didn’t have much of a personality other than a general school girl who likes animals. Finn was great at the beginning. I genuinely liked his character and had very high hopes for him and Teagan – even if she was a very boring character. However, after that certain glossed over point in the book, even Finn’s character took an unexpected turn. He became very one dimensional, and I just didn’t find him as compelling as I did in the beginning. Aiden, Teagan’s brother, was probably the most interesting character in the book. He actually had a personality, interests and hobbies which were clearly put across.

I didn’t find Hamilton’s writing to be very compelling. While the goblins and other creatures were wonderfully described, there was not much said about the characters’ actions and this made it hard for me to follow the story. Again, it started out very well, but after seventy pages or so, it started to become annoying, and even boring. I really had to push myself to finish this book, and I think this is mainly due to the writing style. Also, the amount of new words was, for me, a bit overwhelming. Lots of Gaelic was mixed in with normal, everyday speech, and then other things were referred to by their native names, and I had to constantly go back and check to make sure I hadn’t missed out any explanations. Also, the pronunciations of a lot of the words were not explained, which I did not like because I ended up spending a lot of time over these strange words, and it really took away from the story.

Overall, I give this novel 2/5 because I really didn’t enjoy it and I will not be reading the next books in the series.

Rating: 2/5
You can buy Tyger Tyger from Amazon UK, Amazon US

or The Book Depository.