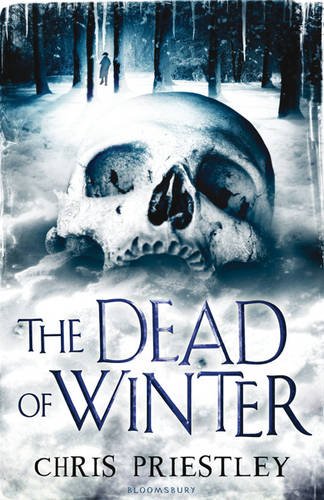 Michael Vyner recalls a terrible story, one that happened to him. One that would be unbelievable if it weren’t true! Michael’s parents are dead and he imagines that he will stay with the kindly lawyer, executor of his parents’ will …Until he is invited to spend Christmas with his guardian in a large and desolate country house. His arrival on the first night suggests something is not quite right when he sees a woman out in the frozen mists, standing alone in the marshes. But little can prepare him for the solitude of the house itself as he is kept from his guardian and finds himself spending the Christmas holiday wandering the silent corridors of the house seeking distraction. But lonely doesn’t mean alone, as Michael soon realises that the house and its grounds harbour many secrets, dead and alive, and Michael is set the task of unravelling some of the darkest secrets of all. A nail-biting story of hauntings and terror by the master of the genre, Chris Priestley – Goodreads

The beginning of the novel throws the reader straight into the story, with Michael’s mother dead and Michael being forced to move in with Sir Stephen – someone Michael’s dad once saved from death – at Hawton Mere. We see Michael move in to the mansion, and then the creepy stuff starts to kick off.

Chris Priestly’s descriptions of the scary goings on in the mansion really creeped me out – especially the parts that were talking about the priest hole! It was so easy to imagine being locked into that creepy place and not being able to get out. There are also ghosts in this story, which were pretty creepy too, but the scariest of them all was the little boy. I won’t go into any more detail than that, because it’ll spoil the book for you, so you’ll just have to use your imaginations!

Michael narrated the recount of his time at Hawton Mere so we saw the whole story from his point of view, including the epilogue at the end. I thought he was a great main character. He was very mature for his age, and he was also very intelligent compared with some main protagonists I have read about in the past. I’d love to see more stories including Michael if Chris Priestly ever writes any, perhaps talking about his travels, because I found myself really beginning to care for Michael. I feel if the novel was a tad longer then I would have felt a stronger connection to him.

Due to the era the novel was set in – and Michael being the narrator of the story – Chris Priestly adopted a writing style similar to how the characters would have written themselves. It works very well, and while it took me a couple of pages to get used to, I ended up thoroughly enjoying it and it definitely added to the appeal of the novel.

I thought this book was very well written, and a lot of the scenes gave me chills. I really enjoyed reading it – despite what my mum may have thought about me covering up my mirror so I couldn’t look into it before I went to bed. I definitely recommend this to readers who love horror novels. For his first full length novel, I think Chris Priestly did a fantastic job at unnerving me!