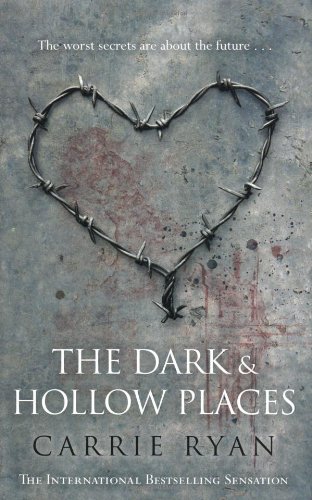 The Dark and Hollow Place by Carrie Ryan
The Forest of Hands and Teeth #3
Release: April 7, 2011 (UK)
Publisher: Gollancz
Rating: 3 out of 5
Buy the Book: Amazon US

There are many things that Annah would like to forget: the look on her sister’s face when she and Elias left her behind in the Forest of Hands and Teeth, her first glimpse of the horde as they found their way to the Dark City, the sear of the barbed wire that would scar her for life. But most of all, Annah would like to forget the morning Elias left her for the Recruiters.

Annah’s world stopped that day and she’s been waiting for him to come home ever since. Without him, her life doesn’t feel much different from that of the dead that roam the wasted city around her. Then she meets Catcher and everything feels alive again.

Except, Catcher has his own secrets—dark, terrifying truths that link him to a past Annah’s longed to forget, and to a future too deadly to consider. And now it’s up to Annah—can she continue to live in a world drenched in the blood of the living? Or is death the only escape from the Return’s destruction? – Goodreads Page

I wasn’t a huge fan of the first book in this trilogy, however I really enjoyed the second. I expected this third novel to be just as good, and went in with high expectations. I was left a little disappointed, though.

Firstly, I wasn’t a fan of Annah as a main protagonist/narrator. I absolutely loved Gabry in the last novel, and would have preferred for her to have been the main character in this book. However, Annah came off as a poor character, spending the majority of the novel whining about her scars and making her insecurities known. With everything that was going on around her, and zombies invading the supposedly ‘safe’ city, I would have thought that after a while she’d have forgotten about her own insecurities rather than carrying on and on. I just couldn’t connect with her as I did with Gabry.
The plot was decent, however I feel that there was way too much focus on the love square – again, *sigh* – and I would have preferred more of an action focussed plot. Like the first book, this one was romance heavy and it became repetitive and boring after a while. You know how I hate love triangles, and love squares dig at me even more. I also wanted to see more of the zombies!
I did love how everything from the last two books came together in this one. The trilogy was wrapped up really well, and yet the ending was left open to possibly leave room for another book or spin off series in the future.
I also loved Catcher! He was such a great character, and I would have loved to have read a whole book about him and his ‘condition’. He’s so adorable, and yet so flawed, so I think he’d make a great main character!
This was a good book, but I just found it to be incredibly poor compared with the second book in the series. Overall, the series is pretty mediocre, and unfortunately it doesn’t make my favourites list. I’d recommend it to fans of zombies and horror, as well as dystopian novels, but I’d be weary as there are such mixed reviews on these books!