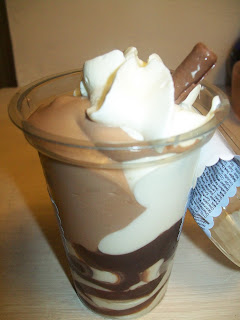 This. It’s a triple chocolate and cream sundae from Marks and Spencer. Gorgeous. That’s all it took to make my day 🙂

I’ve been feeling a bit down this past month or so, and today I suddenly felt a lot better than usual. I went to school, met with some friends and went to my best friend Shivi’s house for dinner. I came home, had the most relaxing bath and then sat in my jammies with a mug of hot chocolate while watching The Vampire Diaries with my mother.

Because I’m in such a bright mood, I have decided to start/take part in a thirty day meme called ‘What Made Your Day Today?’ The title says it all really. I’m not sure if anyone has already started a meme like this, and I promise I’m not trying to take credit for it! But I just want to take part in it because I think posting one thing that made you happy every day will be very uplifting 🙂
So, what made my day today?
The fact that I feel a lot less gloomy has definitely made my day. I feel less tired, and a lot chirpier than I have been for a while. Today has been lovely and relaxing, as well as a lot of fun. So.. that’s what made my day!

There wasn’t much I actually liked about this book, no matter how hard I tried. The main factor which put me off was the writing style. If you’ve read my other reviews, then you will know that I don’t like it when adult authors try to sound like teenagers. It usually always comes across poorly as, believe it or not, a lot of teenagers are very well spoken. Especially if they are as intelligent as you are claiming your character is. In Marked, the writers did just this, and that was their main error. The dialogue came across as silly, childish, and as though the Casts were trying too hard….

END_OF_DOCUMENT_TOKEN_TO_BE_REPLACED

Hi all, so those two followers who have been following me for a few months now know that I haven’t been posting since May. I’m not really sure as to why that is, I guess I just lost my mojo. But I’m now back, and I’ve decided to concentrate more on books and reviews here and then perhaps make another blog for snail mail. Or I may just use this one for both. I’m not sure yet (:

So I just wanted to say ‘Heyyyyyy’ and I promise I won’t leave for such a long time next time!
Amber
– x

I am a huge fan of Cassandra Clare’s previous series – The Mortal Instruments – and I have to say that, to start with, I was a little worried about Clockwork Angel because I had a feeling that the storyline and the characters were going to be repeats of those in TMI. However, being the huge fan that I am, I couldn’t wait to start CA, despite my reservations. I was very pleased to find that I loved Clockwork Angel! I thought it was really good….

END_OF_DOCUMENT_TOKEN_TO_BE_REPLACED

I bought this book last week from Amazon.co.uk and read it in just six hours. I’m quite proud of myself. I was horribly tired in school the next day, but it was well worth it. The Hunger Games by Suzanne Collins is an amazing book, I would recommend it to everyone.

^My edition. You can fold the front cover over to choose which character (Peeta or Katniss) to have on the front.
The main character Katniss comes from the last of twelve Districts in a country that used to be North America. Every year, to celebrate the Capitol’s success, they hold an event called “The Hunger Games”. In light of these Games, each District has to choose one boy and one girl between the ages of twelve and eighteen to represent their District. The twenty four boys and girls must then fight to the death in an arena – which is broadcast on television for all to see – and the winner earns respect, money and a whole new lifestyle.
Katniss and Peeta, of District Twelve, take part in the 75th Hunger Games. This book follows their time preparing for the Games and in the arena.

^ The two characters – Katniss and Peeta. At first, I struggled to get over the strange character names in this book, but I’ve gotten used to it now. Most of the characters – even the minor ones – have fairly odd names.
I ordered the second book in the trilogy on Friday, and it arrived yesterday. For a second hand book it’s in excellent condition. I’m reading it now, and I do prefer the first one but this one is almost as thrilling!

^ The second book in the series.
Read it!
I also bought these books:
‘Gone’ by Michael Grant
‘Gifts’ by Ursula Le Guin
‘City of Bones’ by Cassandra Clare
‘Feed’ by M.T. Anderson
I’m addicted to buying books – it’s quite embarrassing!