For Nora Grey, romance was not part of the plan. She’s never been particularly attracted to the boys at her school, no matter how much her best friend, Vee, pushes them at her…until Patch comes along.
With his easy smile and eyes that seem to see inside her, Nora is drawn to him against her better judgment, but after a series of terrifying encounters, Nora’s not sure whom to trust. Patch seems to be everywhere she is, and to know more about her than her closest friends. She can’t decide whether she should fall into his arms or run and hide. And when she tries to seek some answers, she finds herself near a truth that is far more unsettling than anything Patch makes her feel.
For Nora is right in the middle of an ancient battle between the immortal and those that have fallen – and when it comes to choosing sides, the wrong choice will cost her life. – Good Reads
I was hesitant about starting this book, because I had previously heard very mixed opinions regarding it. Nevertheless, I thoroughly enjoyed it and I think it’s one of my favourite reads of 2010. No, actually, scrap that – it WAS one of the best books I’ve read in the past couple of years.
A lot of people had compared this book with Twilight, and said that there were obvious connections and comparisons leaking out of the binding. however, I beg to differ. Sure, there’s a Biology class in which Patch and Nora first meet; and Patch is the mysterious hunky biology partner for our protagonist. But that is where the similarities stop. Firstly, I’m kind of annoyed, because how can anyone think that the biology scenes in Hush, Hush and Twilight are the same in any way? Patch doesn’t distance himself from Nora, in fact, he seems rather stalkerish at times during the first two thirds of the book. Secondly, Patch and Edward are NOTHING alike. Nothing at all! Edward… well let’s just say he and I don’t particularly get along. He’s pretty boring, has an old fashioned manner of speaking, very reserved.. whereas Patch.. Wow. He teases, flirts and eye-sexes with Nora. He is drop dead gorgeous and his arrogant personality is addictive. I repeat, he’s nothing like Edward Cullen.
Our main protagonist, and Patch’s love interest, Nora is likable enough. She’s an A grade student who has had a lot of personal problems in the past year which she seems to be dealing with pretty well. Her best friend, Vee, however, annoyed the crap out of me. She didn’t act like a best friend would, she seemed very silly – almost childlike at times. But that, for me, didn’t affect the story and I loved the book.
The plot is terrific, with twists and turns around every corner. The twist at the end was clever, and not very predictable unless you are very perceptive and were good at guessing. (Apparently, this is not my area of expertise!) At no point did this story feel slow, and the scenes between Patch and Nora were very… hot… and I could feel their chemistry shocking me through the pages.
Becca Fitzpatrick’s writing was – to me – great and I really loved her descriptions of various locations in the book. She didn’t go into much detail on the characters’ individual features, for example, I could tell you that Nora has wild red curls, and Patch has dark hair and is in ‘Excellent physical shape’, but that’s about it. I loved that I could imagine my very own Patch, Nora, Vee, Jules etc. Some people have complained about this point, but honestly, I found it a very appealing quality.
The Cover: I think the cover for this book is beautiful. I mean, who doesn’t like a half naked Patch descending from heaven? *drools*.
Rating: 5/5
You can buy Hush, Hush from Amazon.co.uk, Amazon.com

or The Book Depository.

The Vampire Diaries, of course! It was a brilliant episode, and I’m just so happy that Damon and Elena’s relationship is on the mend. I predicted a couple of things – like the Kat/Mason team up – that turned out to be correct, and I am SO proud of myself. I never guess anything correctly when it comes to TVD but guess what! I did! YES!

Supernatural is on tonight, and CAS IS BACK!!! OMFG *happy dance*.

More books have arrived, so I’m hopefully going to have an extremely packed In My Mail Box tomorrow afternoon. I think I may do a vlog? I don’t know.

I’ve finally started reading ‘Hush, Hush’ by Becca Fitzpatrick and it is AWESOME. I don’t know why I took so long to buy it. What’s wrong with me?

So yeah, there’s my catch up on WMYDT? I was kind of late for yesterday’s, because I was far too excited for TVD to worry about my blog. I’m sorry 🙁 Haha.

I was just wandering through various blogs, and found this post on Booking Through Thursday.. and I thought I’d join in! However, instead of completing all of the questions in one long post, I’ve decided to do one every few days so that the posts are smaller, and it will keep going for longer 🙂 (I hope that makes sense, I’m not the best at describing what I’m talking about).


Question One: What is your favourite childhood book?
I have so many I can’t only mention one, so here’s my list!


– The Harry Potter Series by J. K. Rowling
I was fortunate enough to discover this series almost as soon as the first book was published, so I’ve been reading them throughout my childhood and teenage years. I literally grew up with Harry and his friends, and I think that these are the books that mainly got me into reading. My favourite book in the series is HP4 – HP and the Goblet of Fire. My least favourite.. I can honestly say I don’t have a least favourite!


– The Saga of Darren Shan by Darren Shan
These books sparked my love of vampire fiction. I don’t have much to say about these books because they are just simply AWESOME and probably my all time favourite series. Each of the twelve books hold a special place in my heart, and I was actually heartbroken when the series ended. But thank goodness Darren Shan is writing a series of prequels featuring Larten Crepsley! YESSSS! *happy dance*


– The Princess Diaries by Meg Cabot
I think everyone in my old school read these books. I thought they were wonderful at the time, and got so excited when the next book in the series was released. The upsetting thing is, I don’t think I ever got to finish these books. I believe I stopped reading before book six (?) was released.


– The Butterfly Lion by Michael Morpurgo
An all time favourite of mine is The Butterfly Lion. I loved all of Morpurgo’s books, but this one has stuck with me since.. 2001, I believe. This book is about a boy who escapes from his boarding school and whilst wandering the streets, he meets an elderly lady who tells him the story of Bertie and his butterfly lion who grew up in South Africa before they were separated. It really is a wonderful book, and a very heartwarming story. I’ll probably do a review on it at some point.


So there you go – my favourite childhood books. The length of this post shows why I’m choosing to separate the questions!

Just the thought of The Vampire Diaries being on tomorrow makes my day worth while! That, and my brother brought me home some gorgeous hot chocolate. Yummy.

I’m also about a third of the way through ‘Tyger Tyger’ by Kersten Hamilton and I’m loving it.

And, last but no least, I got a bunch of new books! And some still need to arrive. October is going to be a good month, I can tell 🙂 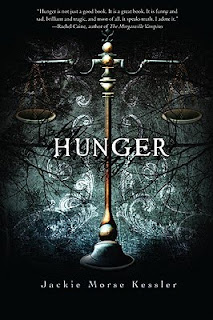 
“Thou art the Black Rider. Go thee out unto the world.”

Lisabeth Lewis has a black steed, a set of scales, and a new job: she’s been appointed Famine. How will an anorexic seventeen-year-old girl from the suburbs fare as one of the Four Horsemen of the Apocalypse?

Traveling the world on her steed gives Lisa freedom from her troubles at home—her constant battle with hunger, and her struggle to hide it from the people who care about her. But being Famine forces her to go places where hunger is a painful part of everyday life, and to face the horrifying effects of her phenomenal power. Can Lisa find a way to harness that power—and the courage to fight her own inner demons?

A wildly original approach to the issue of eating disorders, Hunger is about the struggle to find balance in a world of extremes, and uses fantastic tropes to explore a difficult topic that touches the lives of many teens. – Goodreads

This book was simply brilliant. The reader is immediately thrown into the plot, which contains various amounts of action and fantasy, as well as sticking to the main theme of the novel – anorexia. Jackie Morse Kessler is speaking from a topic of experience, and this shows in her writing, as the main character Lisa talks about her new best friend’s bulimia and Lisa’s own extravagant eating patterns and exercise techniques. The plot flows well, and at no point did I feel bored with what was happening. It was all very intriguing, and at less than two hundred pages it was a very easy read.

The main character, Lisa, was a very likable character who I think teens and young adults will be able to connect with easily. It is clear that she has very little self esteem for a multitude of reasons, most of which leading back to her mother and what Lisa thinks her mother thinks of her. The other characters, understandably, play a lesser role however they are all key to the plot. The other Horsemen of the Apocalypse are all very interesting chracters, even if they haven’t been completely explored as of yet – that’s what sequels are for!

I think that overall, this book is very good – even great – and it is very imformative on the problem of anorexia and I think it will help teenagers and young adults understand the issues with anorexia and bulimia. The fantasy element of the plot adds so much to the story, and I think people of all ages will love this book – not just the target audience.

The Vampire Diaries Season 2 started tonight in the UK. That made me happy. And I finished reading “Hunger” by Jackie Morse Kessler (who is a wonderful person by the way, you can contact her on twitter @jackiemorsekess) and it was amazing! A review will be up on this blog tomorrow morning 🙂

And now, I’m off to bed. I’m sick with yet another cold – and people wonder why I hate autumn? – and despite sleeping almost all day, I am still tired. All of this sniffling it wearing me out.
Goodnight!