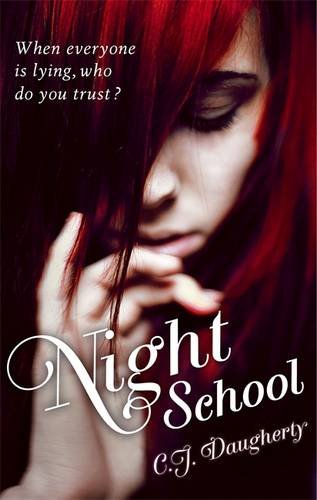 Allie Sheridan’s world is falling apart. She hates her school. Her brother has run away from home. And she’s just been arrested.

This time her parents have finally had enough. They cut her off from her friends and send her away to a boarding school for problem teenagers.

But Cimmeria Academy is no ordinary school. Its rules are strangely archaic. It allows no computers or phones. Its students are an odd mixture of the gifted, the tough and the privileged. And then there’s the secretive Night School, whose activities other students are forbidden even to watch.

When Allie is attacked one night the incident sets off a chain of events leading to the violent death of a girl at the summer ball. As the school begins to seem like a very dangerous place, Allie must learn who she can trust. And what’s really going on at Cimmeria Academy. – Goodreads

Night School was a bit slow to begin with, and that meant that it took a while to get into the story and to start enjoying it. The first one hundred or so pages dragged a little bit, as there wasn’t much action and I was introduced to Allie’s new school and new life.

There were lots if mysteries that were introduced right at the very beginning of the novel, and these weren’t solved until the very end of the book, if at all. It was good as it left a lot of room for the sequels, but I thought that the unravelling of them could have been spread out a little bit more. Again, this is a pacing problem.
I LOVE books set in boarding schools! So the setting was absolutely perfect, and this boarding school was old fashioned, with secret passages. Perfection!
The ending of the novel was simply brilliant, with tonnes of action thrown in there. I loved it, and it definitely made the book better overall.
I wasn’t a huge fan of Allie to begin with as she did some stupid things. She did become a stronger character towards the end, and I hope to see more development in the rest of the series.
Carter, one of the love interests, is pretty cool. I didn’t like the way he was portrayed, as it was very stereotypical, but as Allie got to know him, he grew on me.
As for Sylvain… Well, can somebody please tell me how to pronounce his name? I’m too lazy to look it up, and I was calling him about five different names by the end of the novel. I didn’t like Sylvain one bit, and I hope nothing happens between him and Allie in the future.
I enjoyed the writing style; I think Daugherty did a really good job with describing the story. The only complaint I do have is that the dialogue, at times, was a bit wooden.

Overall, I enjoyed this book. I did have some issues, but it was all together a solid start to a new series. I will be picking up the next book, because I am intrigued!