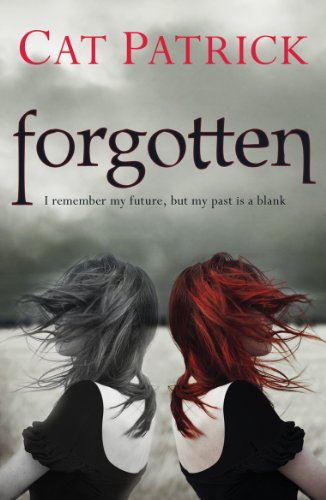 Each night when 16 year-old London Lane goes to sleep, her whole world disappears. In the morning, all that’s left is a note telling her about a day she can’t remember. The whole scenario doesn’t exactly make high school or dating that hot guy whose name she can’t seem to recall any easier. But when London starts experiencing disturbing visions she can’t make sense of, she realizes it’s time to learn a little more about the past she keeps forgetting-before it destroys her future.

Part psychological drama, part romance, and part mystery, this thought-provoking novel will inspire readers to consider the what-if’s in their own lives and recognize the power they have to control their destinies. – Goodreads

The premise for Forgotten definitely intrigued me, even if I was a bit confused by the blurb for a little while.  London’s brain resets every day at 4.33am, and she forgets everything that happened the day before. However, she can see the future instead, as if they were memories.

The overall plot is fast paced, and while it did take a chapter or two to understand exactly what was going on with London’s brain, it was great to read about at Cat Patrick introduced us to this mysterious amnesia. The story is full of twists and turns that I didn’t see coming, and they definitely made my jaw drop each time they arose.
London was a great protagonist. She had long ago come to terms with her unusual illness and it was nice to read about someone who was used to it, rather than a protagonist who was getting used to and discovering her ‘abilities’. London knew exactly how to keep her life as normal as possible, and she remained a strong character throughout the books. In my opinion, at some points she was a little too strong, and I would have liked to have seen a bit more emotion from her. She was also a little bit hypocritical, which annoyed me to begin with until she realised what she was doing.
London’s relationship with Luke, however, wasn’t so great. To begin with it felt very rushed due to London’s feelings for Luke developing very quickly. She said she was falling in love with him on their first date, and I didn’t like that despite the date being pretty much perfect! I would have preferred more build up.
Towards the end of the novel all the mysteries were solved and I liked the outcome of that. However, I did feel that the ending was rushed through, perhaps to keep up with the quick pace of the novel, and perhaps because the book is so short. I would have liked to have had more closure with a couple of parts of the plot, especially regarding a character we learnt of half way through the novel.

Forgotten is a compelling, fast paced read with twists galore. It definitely had me on the edge of my seat the whole way through.