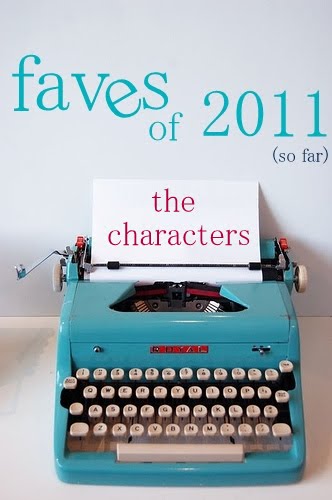 Found over at Ink Crush
1. Best Female POV
I’m going to have to go with Rose from Vampire Academy

. I think if these books had been written from any other POV, they would have sucked so hard. But Rose was the most awesome female (and overall) character I have come across in a long, long time.
2. Best Male POV
I haven’t read many books with a male protagonist this year, but one that stands out clearly is Alex from Perfect Chemistry

. Just because I love him. Lots and lots.
3. Best Couple
Rose and Dimitri, for sure! The two have been through so much together, and they totally deserved to be together in the end. I’m not saying they did get together at the end, you’ll have to find out for yourselves if you haven’t read the Vampire Academy series yet 😉 Plus, they’re both hot!
4. Who I So Want to be Best Friends With
St Clair from Anna and the French Kiss

. I love this group of friends so much – there’s so much drama!
5. Who I Fell Completely in Love With
Booth from Bones. Wait, you mean book characters? My bad 😉 Tod from the Soul Screamers

had the best twist. *zips mouth and throws away the key* Four from Divergent

also deserves a mention!
8. Best Kick-Arse Female
Rose Hathaway!
9. Best Kick-Arse Male
Dimitri Belikov! <3
10. Broke Your Heart The Most
There is a whole bunch of these. Dimitri broke my heart multiple times, as did Will from Angelfire

. Patch… I’m kind of over that now but at the time he broke my heart a lot while I was reading Crescendo

. Jace did in the first three TMI books, and Tod did in his novella Reaper

.
11. Best/Worst Character Names
Dimitri Belikov has a name that makes me swoon whenever I read it. Etienne St Clair, Archer Cross and Patch deserve honourable mentions!

Belly from the Summer trilogy

by Jenny Han has a ridiculous name/nickname. I can’t think of any others that I didn’t like, but I’m sure know I’ve posted this I’ll think of loads more!