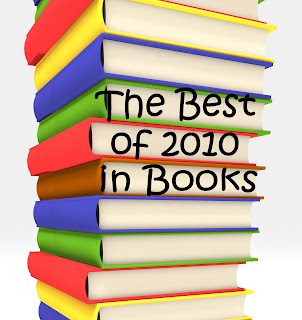 This wonderful survey was created by Jamie at The Perpetual Page Turner. I’ve already done a Youtube video on this survey, but thought I would do a blog post as well.
1. Best Book of 2010?
The best book that I read this year was Before I Fall

by Lauren Oliver. There are several reasons why it was my favourite, which you can read by clicking and reading my review. I think it sums up my thoughts quite nicely. There were a few books that I thought were really great, but Before I Fall was just a notch above the rest.
2. Worst Book of 2010?
This one was fairly easy to choose, because it’s not very often that I dislike a book. But one that I really didn’t like was Tyger Tyger

by Kersten Hamilton. Something about the writing style and the character development just didn’t do it for me.
3. Most Disappointing Book of 2010?
The Forest of Hands and Teeth

was the most disappointing read for me. I had heard so many amazing things about this book, but I didn’t feel that it lived up to the hype surrounding it. Everyone seemed to love the main character Mary, but I really don’t understand why. Again, it’s probably best if you read my review!
4. Most Surprising (in a good way!) book of 2010?
Hush, Hush

by Becca Fitzpatrick. I didn’t expect to like love this as much as I did, as I’d heard many mixed things about it. But in the end it turned out to be one of my favourite books of the year. I think Patch was probably the main reason for that.. but still 😀
5. Book You Recommended to People the Most in 2010?
This was Before I Fall, because it was my favourite read of the year – how could I not recommend it?
6. Best Series You Discovered in 2010?
The Hunger Games

series. I’m so, so happy it was recommended to me! At first, I thought it was a vampire novel for some reason – probably because of the hype around it! – but I was so surprised and I really loved it. I chose this series in particular because it ended this year, and the other series that I read are still going 🙂
My other choice is The Mortal Intruments series by Cassandra Clare. It was an amazing series, and if it had been a single book then I would have probably picked this for Best Book of 2010. It’s an amazing series, very thrilling and exciting, with all-round amazing characters!
7. Favourite New Author/s You discovered in 2010?
Becca Fitzpatrick – author of the Hush, Hush series – and Kiersten White who is the author of Paranormalcy

, which is a new YA series launched this year!
8. Most Hilarious Read of 2010?
I have two choices, again 🙂 The first is Hush, Hush by Becca Fitzpatrick because Patch and Nora were both so, so funny. And The Mortal Instruments

series was great as well, and Jace had some amazing lines which I absolutely loved. I think that’s the reason I love Patch and Jace so much.
9. Most Thrilling, Unputdownable Book of 2010?
The Maze Runner

by James Dashner. The non-stop action was just brilliantly done, and I couldn’t put it down!
10. Book You Most Anticipated in 2010?
Crescendo

by Becca Fitzpatrick. This was the only book this year that I actually pre-ordered so it would arrive on its release date!
11. Favourite Book Cover of 2010?
Again, I have two that I really couldn’t choose from. The first is Firelight

by Sophie Jordan. And the second is Nightshade

by Andrea Cremer. They’re both stunning covers, and the main reasons I bought these books were for the covers!
12. Most Memorable Character in 2010?
Patch and Jace, from Hush, Hush and The Mortal Instruments. I loved these two, and the other characters pale in comparison – for me, anyway!
13. Most Beautifully Written Book in 2010?
Before I Fall by Lauren Oliver. I just couldn’t fault it!
14. Book That Had the Greatest Impact on You in 2010?
Before I Fall by Lauren Oliver. It really made me think about my life, and things that I had done in the past, and also things that happen all the time in high school. It made me realise that the smallest things had the greatest impact on people, and the tiniest thing could really change peoples’ lives.
15. Book You Can’t Believe You Waited Until 2010 to Finally Read?
The Hunger Games by Suzanne Collins; Shiver

by Maggie Stiefvater; Hush, Hush by Becca Fitzpatrick; TMI by Cassandra Clare.
I can’t believe I took so long to discover that YA was a genre all by itself.