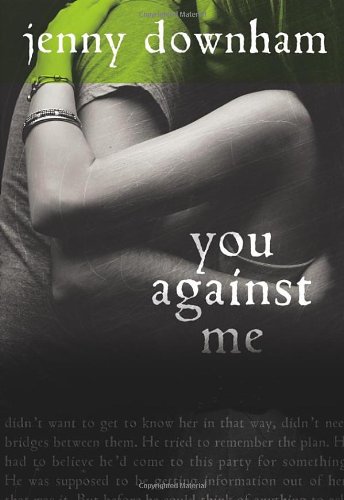 If someone hurts your sister and you’re any kind of man, you seek revenge, right? If your brother’s been accused of a terrible crime and you’re the main witness, then you banish all doubt and defend him. Isn’t that what families do? When Mikey’s sister claims a boy assaulted her at a party, his world of work and girls begins to fall apart. When Ellie’s brother is charged with the crime, but says he didn’t do it, her world of revision, exams and fitting in at a new school begins to unravel. When Mikey and Ellie meet, two worlds collide. Brave and unflinching, this is a novel of extraordinary skillfulness and almost unbearable tension. It’s a book about loyalty and the choices that come with it. But above all it’s a book about love – for one’s family and for another. – Goodreads page

I’m sure a lot of you will have heard of Jenny Downham’s debut novel, Before I Die. I, for one, haven’t read it but I have heard some really incredible things. As you can imagine, this made me extremely excited to read her second YA novel, You Against Me, which is about a boy whose sister has been raped, and a girl whose brother is the alleged rapist.


Of course, this is an extremely serious subject matter which needed to be handled with great care. And I must say, Jenny Downham does it beautifully. Both sides of the story are shown from Mikey and Ellie’s point of view. As a reader, you see how having a family member who was raped affects the rest of the family. And you also get to see how the other half lives, with a son who has been accused of raping a young girl whilst she was drunk.

Mikey and Ellie meet under these strange circumstances, and that aspect reminded me a lot of the way Alex and Brittany fell for each other in Perfect Chemistry. Mikey, at first, just sets out to use Ellie for information on her brother, a lot like Alex sets out to sleep with Brittany for a dare.

Mikey is left to look after his two sisters after his mother has a slight break down after Karyn was raped. He has to deal with Karyn refusing to go to school, while fighting off social services.

Ellie is the primary witness for her brother, and you can imagine the stress that she’s under while her brother is being put through court and it is assumed that she will testify for him. The tension between her, her family, and Mikey is just mind blowing.

I don’t want to ruin anything for you guys, so I won’t say anything more about the plot or the characters. One of the best things about this book is that, as a reader, you’re kept wondering if Ellie’s brother is guilty, or if Mikey’s sister is making it all up.

It’s a truly incredible story about friendship, love and family. I highly recommend it to all of those who enjoy reading realistic fiction. This is a YA novel, but it can most definitely be enjoyed by those who read adult fiction as well.