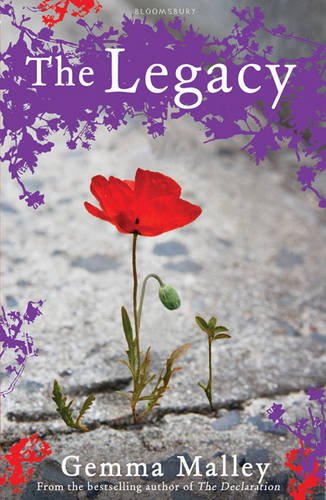 When a Pincent Pharma lorry is ambushed by the Underground, its contents come as a huge surprise – not drugs, but corpses in a horrible state. It appears Longevity isn’t working and the drugs promising eternal youth are failing to live up to their promises. A virus is sweeping the country, killing in its wake, and Longevity is powerless to fight it. When Richard Pincent of Pincent Pharma suggest that the Underground has released the virus, something has to be done to put the story straight and once and for all alert everyone to the truth. – Goodreads Page

I read The Declaration (Book #1) ages and ages ago, and I absolutely loved it. It was one of the books that made me fall in love with the dystopian genre as a whole. A few years later I read The Resistance (Book #2), which I didn’t enjoy as much, but I still thought it was a good book. I was pumped to read The Legacy, because I couldn’t wait to see how the story would end.


The plot began at a really slow pace. The different chapters randomly featured a secondary character, and as someone who hadn’t had time to reread this series prior to The Legacy’s release, I found this rather confusing. Most of the secondary characters that were featured were important in some way, but I would have liked to have spent more time with them, rather than only one chapter.


Two thirds of the way in, though, the plot kicked in, leading to a fantastic climax for both the book and the series as a whole. There were a couple of plot twists in there which I hadn’t even thought about previously, right up to just before they were discovered. I thought this aspect of the novel was done brilliantly.


There was also an epilogue which, surprisingly for me, I did also enjoy. It gives just enough information about what becomes of the world after the final chapter to satisfy me. I would have liked to see a little bit more, but I was happy with what I got.


I didn’t care much about any of the characters in this book. There was little character development and it seemed as though the characters were now only there to spur the plot on. I would have liked to have seen more of Anna, considering she had such a big part to play in the first book. Instead she was barely in any of the scenes and even when she was, she wasn’t doing much.


Overall, whilst I did enjoy some aspects of the story, I wasn’t a huge fan of this book. It’s a bit of a let down, because I enjoyed the rest of the trilogy so much! I disliked the slow pace, and I felt that the plot and the characters could have been worked on a bit more.


Have any of you guys read this series? What did you think of it? I’d love to know.