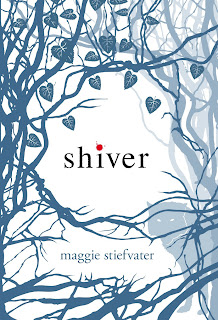 the cold.
Grace has spent years watching the wolves in the woods behind her house. One yellow-eyed wolf—her wolf—watches back. He feels deeply familiar to her, but she doesn’t know why.
the heat.
Sam has lived two lives. As a wolf, he keeps the silent company of the girl he loves. And then, for a short time each year, he is human, never daring to talk to Grace…until now.
the shiver.
For Grace and Sam, love has always been kept at a distance. But once it’s spoken, it cannot be denied. Sam must fight to stay human—and Grace must fight to keep him—even if it means taking on the scars of the past, the fragility of the present, and the impossibility of the future. – Goodreads


The plot mainly revolves around Grace and Sam, and their relationship. They have the forbidden love thing going on, as Sam turns into a wolf every winter, making a relationship between the two of them next to impossible. I found their relationship to be very cute, however I did find a couple of points a bit unrealistic. *SPOILER* For example, Grace lets Sam sleep in bed with her the first night she properly meets him? Sure, they’ve been watching each other for years, but I find it a bit unbelievable that she would do this, right? Let him sleep on the floor.
There’s a bit of mystery going on, tons of action and of course, plenty of supernatural elements to keep you entertained.


The werewolf lore is interestingly done; I found it to be very, very original, and probably the most compelling part of the plot. In the winter, the werewolves are wolves. As the weather gets warmer they change back into human but the older they get, the warmer the temperature has to be to change back. The cycle begins again as the weather gets colder. It really was an interesting storyline, and this lore was one of the main battles Grace and Sam faced.


The characters weren’t amazing, but they were likable enough. Grace is a clever student, with a good head on her shoulders. Sam was a young werewolf, he was kind and sweet. Grace’s interactions with Sam are, at times, hilarious, as they are both witty and sarcastic, as well as loving and friendly. The secondary characters were also interesting. I would have liked to have seen more of them, but I guess there was only so much Maggie Stiefvater could fit into the short book.


The book is told from both Grace’s and Sam’s perspectives. I really loved this point, because I loved knowing each persons’ points of view. I also loved that I knew things that other characters didn’t, but at the same time was left in almost complete mystery until the time came for these points to be revealed.


Something about the writing style just didn’t draw me in initially, and I think that’s why I took so long to read the first half of the book. However, it did pick up (or I got used to it) and by the end I was left wanting to read more.


This book was a slower read for me and I’m unsure if that is because of the writing or the plot. However, I’m very glad that I finished this book, and will definitely be buying the sequels Linger

(out now) and Forever

You can buy Shiver from
Amazon UK|Amazon US