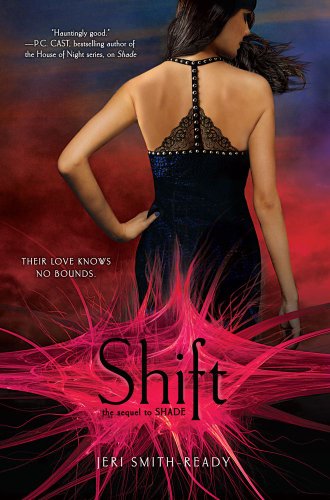 Shift by Jeri Smith-Ready
Release Date: May 3, 2011
Publisher: Simon Pulse
Rating: 5 out of 5
Recommended? Yes
Buy the Book: Amazon US

Aura’s life is anything but easy. Her boyfriend, Logan, died, and his slides between ghost and shade have left her reeling. Aura knows he needs her now more than ever. She loves Logan, but she can’t deny her connection with the totally supportive, totally gorgeous Zachary. And she’s not sure that she wants to.
Logan and Zachary will fight to be the one by her side, but Aura needs them both to uncover the mystery of her past—the mystery of the Shift.
As Aura’s search uncovers new truths, she must decide whom to trust with her secrets…and her heart. – Goodreads page

Shift picks up some months after Shade ended, with Aura calling for Logan to come back to her. The plot picks up straight away, with multiple surprises happening which left me questioning everything that I learnt in book one.

There is a lot of background information in this book, and we learn a lot about Newgrange, and what went on there between Aura’s mum and Zach’s dad. We also learn more about certain things that happen during the solstice, and a few theories are brought up as to why the Shift happened in the first place. I really loved learning about all of this, and I didn’t feel as though the information was being thrown at me. It was very intriguing, and now I still need to know more!
There isn’t much difference in Aura’s character between Shade and Shift, but I loved her much more in this book for some reason. A couple of her actions really annoyed me, but again this seems to happen with a lot of the female protagonists that I read about. So don’t take what I say about her too seriously.
Zach and Aura had a lot of stuff going on between them. They had a very on/off relationship, which did become frustrating because I was shipping them so badly! I won’t say what happens, but I will say that I’m even more frustrated (in a very good way) with the result. I want more!
I said in my previous review of Shade that Logan was an idiot, and very self centred. In Shift, I was kind of dreading Logan showing up again. However, during this book, Logan grew up. I actually came to rather like his character after the first half of the book. Aura mentions this to Logan, when she says (I’m paraphrasing) “It took your death for you to grow up.” It was adorable.
I also mentioned that Smith-Ready didn’t do a great job when using Briticisms in Shade, but in this book she definitely stepped it up! My favourite part was when Aura said that they had “jackshit and sod-all”. Sod-all! Perfect.
Overall, I love this book. I think it is a brilliant sequel to Shade – packed full of touching scenes and hot romance.