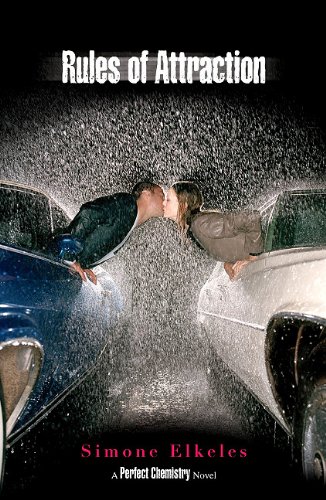 When Carlos Fuentes returns to America after living in Mexico for a year, he doesn’t want any part of the life his older brother, Alex, has laid out for him at a high school in Colorado . Carlos likes living his life on the edge and wants to carve his own path—just like Alex did. Then he meets Kiara Westford. She doesn’t talk much and is completely intimidated by Carlos’ wild ways. As they get to know one another, Carlos assumes Kiara thinks she’s too good for him, and refuses to admit that she might be getting to him. But he soon realizes that being himself is exactly what Kiara needs right now. – Goodreads page

Warning: This review is likely to contain slight spoilers from Perfect Chemistry, so I don’t suggest reading this review unless you’ve read the first book or unless you love spoilers!

As a lot of you may know, I wrote a very positive – and gushing – review of the first book in this fantastic trilogy, Perfect Chemistry. I loved the book so much, but I was hesitant to pick up Rules of Attraction as the storyline sounded *very* similar to that of the first book. After many recommendations, I finally decided to give this book a try.
Rules of Attraction picks up some time after the events of Perfect Chemistry, but instead of focussing on the wonderful Alex and Brittany, this book focuses on the middle Fuentes brother.
Carlos is just as sexy as Alex was, and he does seem even more badass. That’s not to say that I prefer Carlos, as I don’t. I definitely still love Alex the most, as I found Carlos to be quite annoying at times. He was still great though. It must be his brilliant genes.
Kiara is signed to show Carlos around school, as he’s new, and to walk him to his lessons. This is when you can just tell that there’s going to be some sort of relationship forming between the two of them. When Carlos gets into trouble and moves into Kiara’s house (long story), that is when things really start to pick up – for better and for worse.
Overall, I did love this story but it just didn’t have the same feel to it as Perfect Chemistry did. It seemed to recycle a lot of the original story, whilst altering things slightly for the new male protagonist. I will, of course, be reading the third book in the trilogy – because this series is just too good not to read!