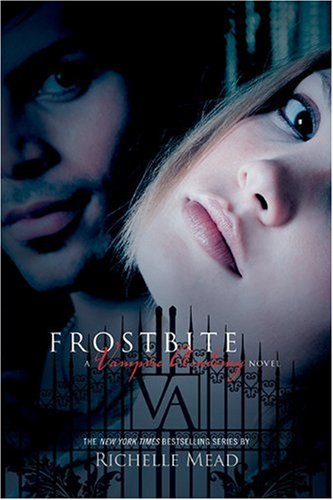 Rose loves Dimitri, Dimitri might love Tasha, and Mason would die to be with Rose…
It’s winter break at St. Vladimir’s, but Rose is feeling anything but festive. A massive Strigoi attack has put the school on high alert, and now the Academy’s crawling with Guardians—including Rose’s hard-hitting mother, Janine Hathaway. And if hand-to-hand combat with her mom wasn’t bad enough, Rose’s tutor Dimitri has his eye on someone else, her friend Mason’s got a huge crush on her, and Rose keeps getting stuck in Lissa’s head while she’s making out with her boyfriend, Christian! The Strigoi are closing in, and the Academy’s not taking any risks… This year, St. Vlad’s annual holiday ski trip is mandatory.
But the glittering winter landscape and the posh Idaho resort only create the illusion of safety. When three friends run away in an offensive move against the deadly Strigoi, Rose must join forces with Christian to rescue them. But heroism rarely comes without a price… – Goodreads Page

Warning: This review contains spoilers from Vampire Academy, so if you haven’t read it then I don’t suggest reading this review. However, feel free to check out my spoiler free Vampire Academy review and choose to read the book! 😉

Okay, so, if you’ve been following me for a while now, you’ve probably all read my gushing review of Vampire Academy, book one in the series. This review probably isn’t going to be any different, so I’m just going to say now that I thought this book was amazing, brilliant, flawless… so pick it up if you loved Vampire Academy and want to read the rest of Rose’s story!


Those of you that are still with me, let’s begin. The book picks up a few weeks after Vampire Academy has ended, with Victor now locked up for his kidnapping of the Dragomir princess. Of course, that does not mean that Rose and her friends can now live in peace! There’s a Strigoi attack on one branch of the royal families, leaving no one alive, and so St. Vlad’s Academy decides it would be nice to ship its students off to a fancy ski resort for the winter break.


The action kicks off right from the beginning, with the family I mentioned earlier being attacked by Strigoi and murdered, leaving their bodies to be discovered by Dimitri and Rose. Of course, who else would walk right into a murder scene? Rose is just full of luck. It is discovered that the Strigoi are getting clever, and are now recruiting humans to do their dirty work. Scary, huh? Now the Moroi and dhampirs can be reached in the day as well.


So, off to the ski resort they go, and that is when Adrian is introduced. Adrian. He’s snarky, he smokes, he’s dark and gloomy.. He’s rather hilarious, actually. A brilliant addition to the Vampire Academy cast *wink wink*.


Rose still hasn’t gotten over her feelings for Dimitri, and so she spends a lot of her time pondering over those. I love reading about their scenes together. *swoonsqueeomgsigh* Rose also thinks that Dimitri may be in love with a Moroi royal, and that spawns a whole load of jealous and juicy scenes.


The ending is just incredible. It’s action packed, and we get a chance to really see what the Strigoi can do. It’s pretty scary and creepy. Rose and her friends are badass. It also makes you really sad, for reasons I won’t go into.


Overall, this book is made of win, just as the rest of the series is. The series does honestly keep getting better and better, so if you – for whatever reason – didn’t enjoy book one, then I highly suggest continuing to book two. And book three, four, five and six.