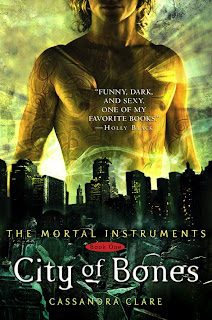 When fifteen-year-old Clary Fray heads out to the Pandemonium Club in New York City, she hardly expects to witness a murder – much less a murder committed by three teenagers covered with strange tattoos and brandishing bizarre weapons. Then the body disappears into thin air. It’s hard to call the police when the murderers are invisible to everyone else and when there is nothing – not even a smear of blood – to show that a boy has died. Or was he a boy?

This is Clary’s first meeting with the Shadowhunters, warriors dedicated to ridding the earth of demons. It’s also her first encounter with Jace, a Shadowhunter who looks a little like an angel and acts a lot like a jerk. Within twenty-four hours Clary is pulled into Jace’s world with a vengeance, when her mother disappears and Clary herself is attacked by a demon. But why would demons be interested in ordinary mundanes like Clary and her mother? And how did Clary suddenly get the Sight? The Shadowhunters would like to know….

Exotic and gritty, exhilarating and utterly gripping, Cassandra Clare’s ferociously entertaining fantasy takes readers on a wild ride that they will never want to end. – Goodreads


The plot ultimately revolves around Clary discovering that she is, in fact, part of a secret and mysterious world rather than the ordinary human girl she thought she was. The plot moves quickly, Cassandra Clare literally throws you right in on the first page. The fast pacing continues throughout the book, literally right to the very end, yet it still manages to flow very nicely. A huge pat on the back to Cassandra Clare for pulling this off!


Unfortunately, I was spoiled before I read this book, so that HUGE plot twist at the end did not have a huge effect on me as I knew how everything was going to pan out. I do suggest not reading any spoilers on this book until you’ve finished reading it.


As a main character, I liked how Clary was strong willed and fiesty. She didn’t let anyone push her around, which was great. Clary is an ordinary girl which I suppose a lot of people could relate to in that way – unless you’re really a Shadowhunter, in which case, why are you reading my review when you should be out saving the world? However, for some reason I couldn’t fully connect with her which slightly took away from my expereince with this book.


Jace, on the other hand, is who really kept this book going for me. I enjoyed his arrogance – which did sometimes get a bit much, but it was fun nonetheless – and his sarcastic humour. Jace was definitely my favourite character in this book, as he had so many sides to him, and what Cassandra Clare was telling you was barely touching the surface.


Simon, Clary’s best friend, was a fun character to read about, and I really liked him. However, he did do some pretty silly things which made me feel sorry for him rather than laugh.


A lot of people were very put off by the ending and the twist that I mentioned earlier. However, I do encourage those people to continue reading to see how everything works out, because the next two books in the series are just as good – if not better – than this one!


Overall, I really loved this book. If you’ve read my review on Clockwork Angel

then you’ll know that I’m a big fan of Cassandra Clare’s books. If you’ve read this book, then let me know what you thought of it!

Rating: 4/5
Buy City of Bones at:
Amazon UK|Amazon US