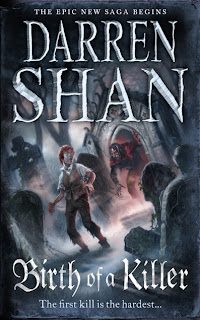 Before Cirque Du Freak…
Before the war with the vampaneze…
Before he was a vampire.
Larten Crepsley was a boy.


As a child labourer many centuries ago, Larten Crepsley did his job well and without complaint, until the day the foreman killed his brother as an example to the other children.


In that moment, young Larten flies into a rage that the foreman wouldn’t survive. Forced on the run, he sleeps in crypts and eats cobwebs to get by. And when a vampire named Seba offers him protection and training as a vampire’s assistant, Larten takes it.


This is his story. – Goodreads


This is the first book in the new four book saga by Darren Shan. It’s the highly anticipated prequel to his previous saga – The Saga of Darren Shan

– and it’s all about a certain Mr Larten Crepsley! Words cannot describe how excited I was to read this book, as I loved Shan’s previous saga, as well as the Demonata series, and Mr Crepsley is one of my favourite fictional characters of all time!


The book is split into four parts, which all cover different sections of Larten’s life as a vampire assistant, and then as a vampire. This creates a fast moving plot with a lot of action thrown in. That’s not to say that the book is just for teenage lads who want to see some killing, oh no. It’s quite the opposite. There’s some pretty sentimental and emotional stuff in there too, and I was in tears at one point.


For anyone who’s read The Saga of Darren Shan (TSDS), you will know Larten Crepsley, but this book lets you in on his background and his past. You find out why he has bright orange hair, and you begin to understand why he was the way he was in TSDS. I loved Larten in this book, he was brave and funny, and at the same time very flawed as a person and he certainly had his demons.


The other characters were simply amazing. Every single one of them was beautifully developed and described. I loved meeting Seba Nile – Larten’s mentor – again, and I loved visiting Vampire Mountain and seeing all of those familiar names. There were also many connections to events and people in TSDS thrown in, even if we didn’t meet/see them first hand. Which was simply AWESOME! I’m particularly excited to see what happens with Wester – you’ll know who I mean when you read the book. He’s a great character.


Overall, I highly recommend this book but you should read TSDS first, as I did, so you get a feel for his writing, and also so you can make all of the connections that I did!