Share your current fav television show! Tell us a bit about it…

I have two favourites that I just can’t choose from. The first is the CW’s Supernatural (Friday nights, 9pm EST) starring Jensen Ackles (<3) and Jared Padalecki. They play two brothers who are supernatural hunters. They travel around the US (and at one point they were in the UK!) hunting “monsters” such as demons, ghosts and vampires. The show is currently in its sixth season, and I’m certainly hoping there’s more to come! It’s such a fun show, and watching the brothers’ relationship is one of the main draws. As well as Jensen (see below). Dean Winchester has some of the best lines on television.
Quote:
[after being arrested for murder, fraud etc]
Henricksen [special agent]: You think you’re funny?
Dean: I think I’m adorable.

My other favourite show is also on the CW (Thursday nights, 8pm EST). It’s The Vampire Diaries, starring Nina Dobrev, Ian Somerhalder and Paul Wesley. As you may be able to tell, the show is about vampires – and occasionally the odd werewolf. There’s too much going on to really explain, but it is such a great show, you should definitely check it out if you haven’t seen it already. Damon Salvatore (IS), again, has some of the best lines of television. He needs them, really, as he has so much going on in his life at the moment. And Nina Dobrev playing two characters at once definitely makes for an interesting viewing!
Quote:
Damon: It’s cool not growing old. I like being the eternal stud. 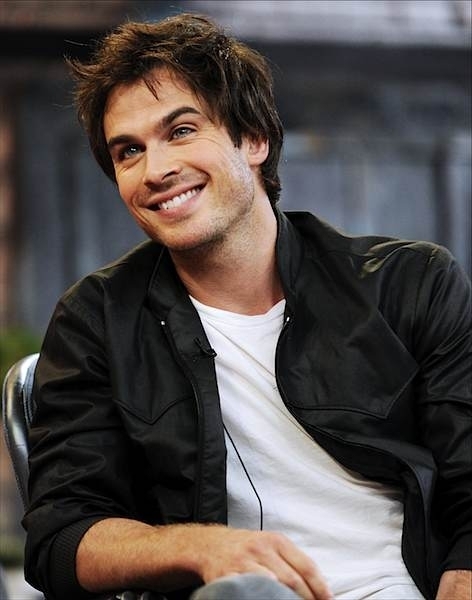 Question
Do you ever wish you would have named your blog something different?
Some of my long term followers may remember that I actually renamed my blog a while back. When I first started this blog, I didn’t know it was going to be primarily for book reviews. I was going to keep it as a travel journal for when I visit Australia. But that took too long coming around (2013!) and so I decided to turn this into a book blog. And of course, “Coconuts and Cream” wasn’t the best name! So a couple of months into blogging, I renamed my blog. I’m glad I picked “Books of Amber”. It fits nicely, and I think it has a nice flow to it.